Good luck to all of our students competing in this year’s Collegiate Nationals. 2018 NCJA National Championships will be held at Iowa State University in Ames, Iowa. San Jose State University will have ten competitors in total, three girls and seven boys. For the girl’s division, we have Shadi Ebrahim at 57kg division, April Fehr fighting at 63kg, and Laurel Zemke fighting 70kg. For the boy’s bracket, we have Colby Hanley, Jr. at 60kg, Joshua Farin and Yu Matsushita fighting 66kg, Cooper Sciascia and Will Inserra fighting at 72kg, Greg West at 81 kg, and Bader Alsumait at 100+ kg. San Jose State. Stay toon for a follow-up update! 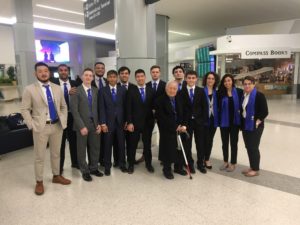 Follow up after the tournament. Congratulations to all that competed this weekend. San Jose State girls took first place in the team competition and the boys got a heartbreaking second place for the team competition losing only by one point to West Point. San Jose State took six metals this weekend with four golds and two silvers. On the girl’s side Shadi Ebrahim and April Fehr took first, Laurel Zemke took a silver. On the boy’s side, Colby Hanley, Jr. and Greg West took first and Cooper Sciascia took second. Thank you, Iowa State University for hosting a wonderful tournament. Also would like to give thanks to all of our instructors for supporting and encouraging us throughout the years.